If you’re in the market for a vehicle with the fuel economy and sporty performance of a sedan with the cargo space of a larger SUV, the 2014 Ford Edge in Kansas City, MO is the vehicle for you. As a mid-size crossover SUV, the Edge is both efficient and spacious, making it a great vehicle for just about any lifestyle.

The 2014 Ford Edge is available in four different trims, but regardless of trim, the Edge provides a sporty look and performance. Power comes standard with a 285-horsepower, 3.5-liter V6 capable of delivering 27 mpg on the highway, but you also have the choice of two other powerful and efficient engines. Arguably the best option under the hood is the 2.0-liter EcoBoost four-cylinder which employs twin-turbo and direct injection technology allowing it to provide the power of a V6 with the efficiency of a four-cylinder. The 240-horsepower engine is able to achieve a highway fuel economy rating of 30 mpg on the highway.

If you’re one of the power-hungry types of drivers, you’ll likely find that the larger-displacement V6 engine is the most appealing of the three. The 3.7-liter engine is capable of producing an output of 305 horsepower and 280 lb-ft of torque. Despite its impressive power, it’s still able to produce impressive fuel economy ratings of 18 mpg in the city and 26 mpg on the highway. 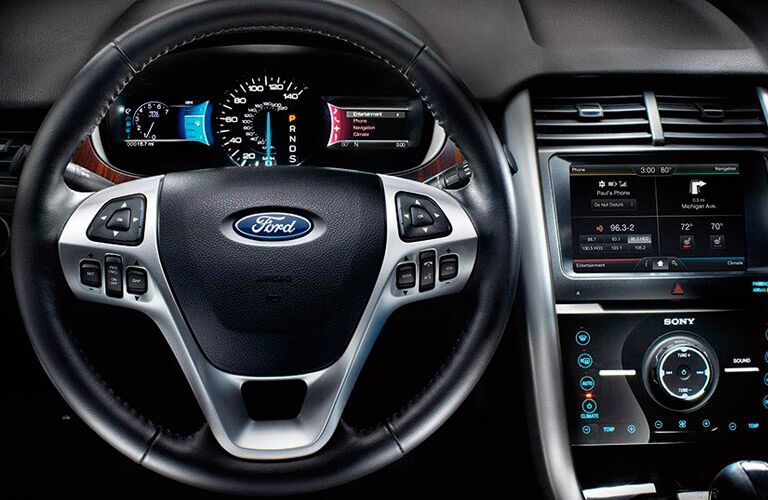 Interior Capabilities of the Ford Edge

When it comes to storage space, there aren’t many sporty SUVs that are quite as capable as the 2014 Ford Edge. Despite being smaller than many of the crossovers on the market, the SUV is equipped with a number of features that help to maximize the space that it does provide.

The Edge has a passenger volume of 108.4 cubic feet, which is extremely spacious for a five passenger SUV. It allows the Edge to provide a best-in-class rear legroom, so you don’t have to worry about knees in your back while you’re driving. That passenger volume easily converts to storage space with the split-folding rear seatback which collapses to provide a maximum cargo volume of nearly 70 cubic feet. It’s more than enough to transport just about anything that you can imagine. Even when the second-row seat is in use, the cargo volume behind the seat exceeds 30 cubic feet which is more than enough room for all five passengers’ luggage for road trips. You can rest assured that both comfort and convenience come standard in the 2014 Ford Edge.

Get the Ford Edge in Kansas City MO

The superior features of the Edge don’t end at efficiency and storage capability. The crossover is also extremely safe. It comes with a wide variety of standard and available safety features including, but not limited to, an adaptive cruise control and forward collision warning system which help to prevent accidents from ever occurring. In the event that a collision does occur, you’re safe in the cabin of the 2014 Ford Edge, which recently scored the highest rating of “good” in every crash safety test that it was subjected to.

If you’re interested in finding out more about what the 2014 Ford Edge offers, we suggest that you schedule a test drive today. We currently have the 2014 Ford Edge in Kansas City, MO, and are more than happy to help you be among the first Kansas City residents to get behind the wheel of the powerful, efficient, spacious and safe Ford Edge. To schedule a test drive, simply fill out the form on this page and one of the experts from Matt Ford will be in touch with you. 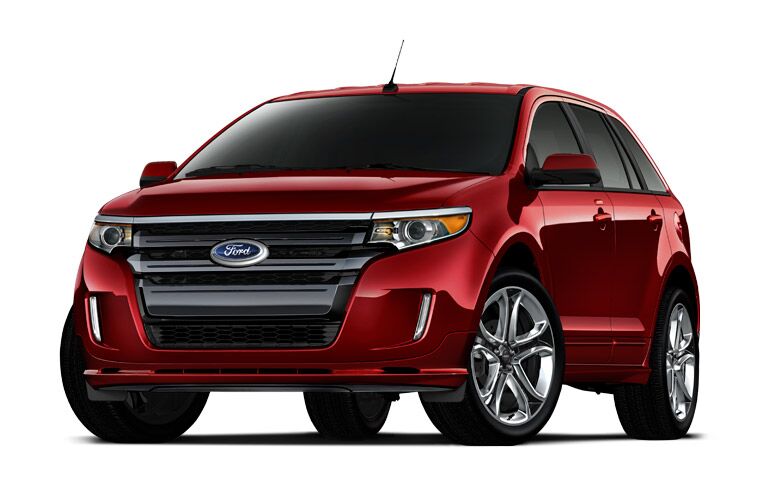