Buyers in the market for an SUV are typically looking for three things in particular: extensive storage capabilities, superior fuel efficiency and extreme power. The 2014 Ford Escape in Kansas City, MO not only offers all three of those capabilities, but it does so at a price that’s extremely reasonable.

Loading and hauling in the Ford Escape has never been easier. The cargo area is not only spacious, but unbelievably accessible as well. It all starts with the power liftgate. Like many other SUVs, the liftgate can be opened manually, with the button on the key fob or buttons on the interior, but the Escape’s liftgate is also foot-activated. When the intelligent key is near the vehicle, you simply have to wave your foot under the rear bumper and the liftgate will rise for you. It’s perfect when your hands are full. Once the liftgate is opened, you have access to the 34.3 cubic feet of space behind the second row of seats. If the rear seat isn’t in use and you need more space for storing, simply collapse the 60/40 split-folding rear seatback to open the back of the Escape to 67.8 cubic feet of flat storage space. Believe us, there really isn’t much that you can’t fit in the back of the 2014 Ford Escape. When you want to keep items out of sight, there is a convenient hidden storage bin hidden under the rear floor mat. If versatile storage is at the top of your wish list, you will be sure to appreciate that it comes standard in the 2014 Ford Escape.

Power and Efficiency in the 2014 Ford Escape 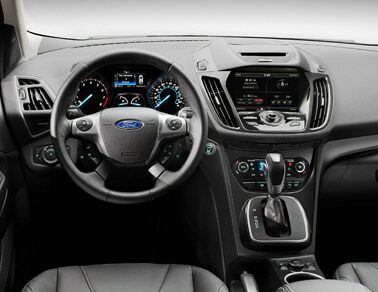 Much like versatile storage, power and efficiency also come standard in the 2014 Ford Escape. The Escape is made available with the choice of two engines, both of which employ EcoBoost technology that can be found under the hood of just about every Ford model.

The SUV comes standard with a 1.6-liter four-cylinder EcoBoost which is great for those seeking unmatched fuel efficiency. The 178-horsepower engine is capable of traveling up to 32 mpg on the highway which is extremely impressive when compared to the fuel economy ratings of some of the Escape’s biggest competitors that struggle to break the 30 mpg barrier.The available 2.0-liter EcoBoost engine is reserved for those planning to use their Escape for towing. The larger-displacement engine allows the Escape to produce higher output numbers including 240 horsepower and 270 lb-ft of torque. Despite the increased power, the 2.0-liter engine is still able to deliver a highway fuel economy rating of 30 mpg.

Get the Ford Escape in Kansas City MO 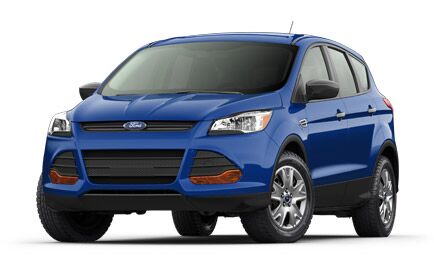 Regardless of size, both of the engines are mated to a six-speed SelectShift Automatic transmission that helps to maximize efficiency, but also provides smoother acceleration and increased performance. The Escape is also equipped with an intelligent 4WD system that automatically adjusts torque distribution to provide unmatched performance in a variety of situations. It all works through the Torque Vectoring Control which is able to transfer power to the wheels with the most grip, allowing the Escape to constantly maintain performance—even in unfavorable conditions.

If you’re interested in learning more about the 2014 Ford Escape, we recommend that you schedule a test drive here at Matt Ford. It’s the best way to get an idea of all that this versatile and efficient SUV has to offer. We currently have the 2014 Ford Escape in Kansas City, MO, so fill out the form on this page to schedule a test drive. We can help to make you one of the first to get behind the wheel of the Escape in Kansas City.

Experience all that the 2014 Ford Escape in Kansas City, MO has to offer.