With gas prices higher than ever, buyers in the market for a full-size sedan are typically looking for superior fuel economy at an affordable price. There are plenty of sedans out there for a reasonable price, but not many are able to achieve fuel economy ratings quite like the 2014 Ford Fusion in Kansas City, MO.

The all-new Ford Fusion is capable of traveling up to 22 mpg in the city and 34 mpg on the highway, which is quite impressive when you consider the fact that many automakers still struggle to break the 30 mpg barrier. The increased fuel efficiency comes from the 2.5-liter addition to the line of EcoBoost engines found under the hood of the Fusion. The 175-horsepower engine comes standard in the Fusion, but those looking to further increase efficiency can opt for one of the other two engines, one of which is a 181-horsepower 1.5-liter EcoBoost engine that is able to produce 36 mpg on the highway.

You may be aware that Ford added a hybrid drivetrain to the Fusion for the 2013 model year, but if you’re not sure of what it’s capable of, you’ll be sure to appreciate that the 2014 Ford Fusion Hybrid is capable of producing a fuel economy rating of 47 mpg both in the city and on the highway, which is nearly double the fuel economy of the average car.

With numerous engine and drivetrain options, there is something for everyone in the 2014 Ford Fusion. Whether you’re looking for power or efficiency, you are guaranteed to find it under the hood of the all-new Fusion.

Features of the 2014 Ford Fusion 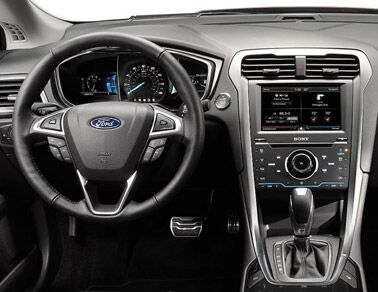 On top of superior fuel efficiency, the 2014 Ford Fusion comes with a number of features both inside and out. The newest addition to the Fusion is an available all-wheel drive system which improves handling in unfavorable conditions, making the sedan safer that it has ever been before.

Another new feature that comes available in the Ford Fusion is an Auto Start-Stop system that can automatically shut off the engine when the car comes to a stop. As soon as you take your foot off the brake pedal, the engine seamlessly kicks in to ensure that all of that extreme engine power will be at the ready as soon as your foot reaches the gas pedal. It’s just one of the many ways that the Ford Fusion helps you to get the most out of a tank of gas.

Get the Ford Fusion in Kansas City MO 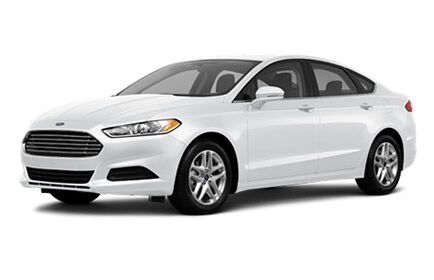 The all-wheel drive system is just one of the many safety and security features that come standard and available in the all-new Fusion. Among the newest safety features are inflatable second-row safety belts that help spread crash force protection over 4.2 times more body area while also providing support to the head and neck. The inflatable belts join the slew of airbags, including side-curtain airbags which help to ensure that your most precious cargo is protected in the event of an accident. The Ford Fusion even has the ratings to back that claim up. The various safety features of the Ford Fusion helped the sedan to receive the highest Top Safety Pick+ rating from the IIHS, so you can rest assured that you and all of your passengers are safe in the Fusion.

If you’re interested in learning more about the 2014 Ford Fusion in Kansas City, MO, get a hold of our team here at Matt Ford. We have all the information you need about all that the new Fusion has to offer, but we also have the sedan here in our inventory meaning that you can take it for a test drive and experience all that it has to offer for yourself. Simply fill out the form on this page to get more information or schedule a test drive.

Experience all that the 2014 Ford Fusion in Kansas City, MO has to offer today!