Over the years, the Ford Explorer has become one of the most recognized vehicles not only in its class, but in the market in general. The fame of the SUV stems from its unwavering capabilities that only seem to get better with age. It’s a claim backed by the 2015 model, which serves as one of the most capable Ford Explorer models in existence with its superior power, fuel economy and unique off-road performance.

Seeing as the Explorer has sat at the top of its class for a number of years, there are almost always competitors nipping at the heels of the SUV, including the Chevy Traverse, which is one of the Explorer’s biggest rivals. A closer look at the 2015 Ford Explorer vs 2015 Chevy Traverse, however, shows that when it comes to the capabilities that matter most to buyers in the segment, the Explorer reigns supreme.

One of the reasons that the Explorer is able to pull off such impressive performance is that it offers a pair of EcoBoost engines within the option list. When equipped with the smaller 2.0-liter four-cylinder, the SUV is able to travel as far as 20 mpg in the city and 28 mpg on the highway, making it far more efficient than the Traverse, which maxes out at 24 mpg on the highway. Even the larger 3.5-liter EcoBoost V6 that is made standard in the higher-end trims is fuel efficient. It has the ability to stretch a gallon of gas as far as 22 miles, and as it comes turbocharged, it possesses the ability to generate 365 horsepower with ease.

Benefits of the 2015 Ford Explorer

Another one of the most significant benefits of the 2015 Ford Explorer is that it offers a level of off-road performance quite unlike anything else out there. For one, it comes with Intelligent 4WD, a system that monitors conditions and provides a great deal of traction in even the most unfavorable of conditions. It also has an available Terrain Management System which has a number of different modes, allowing you to get the level of performance that you need on terrains such as mud, sand, grass and snow.

As if all of the extra features weren’t enough, the Explorer offers up a price that is slightly lower than that of the Traverse. It’s only a difference of roughly $200, but when you consider the fact that you get a lot more for a lot less, it’s clear to see why so many are turning to the Ford, rather than the Chevy offering.

If you are interested in testing out the 2015 Ford Explorer for yourself and seeing exactly how it is able to compare to the 2015 Chevy Traverse, we encourage you to schedule a test drive here at Matt Ford. We have the SUV in stock near Kansas City MO, and would be pleased to give you an up-close-and-personal look at all that the popular utility vehicle has to offer. As always, if you have any questions for us, don’t hesitate to reach out to us. We would be more than happy to help in any way that we can. 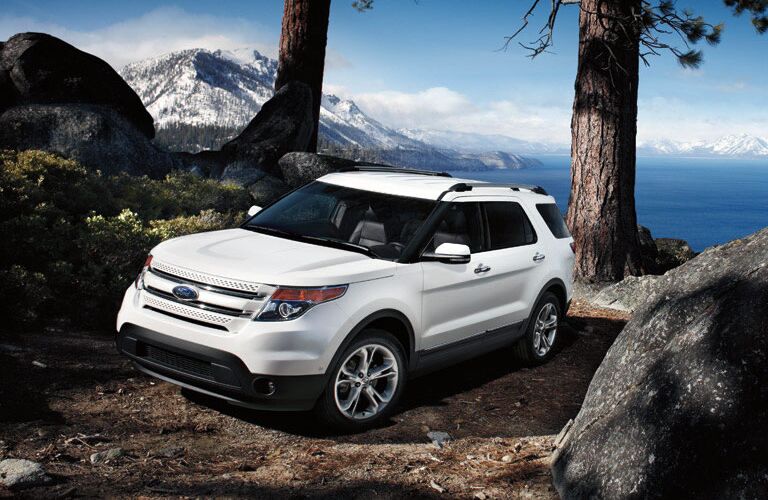