If you haven’t already heard, the F-150 is receiving a complete overhaul for the 2015 model year, and will now feature a body made of aluminum. The all-new truck is set to arrive a little later this year, so it will be a little while before we see the 2015 Ford F-150 in Kansas City, MO, but we have a great deal of information about the pickup to get you prepared for its official release date.
When it comes to truck owners, superior power is always a top priority, and you’ll be sure to appreciate that the 2015 Ford F-150 will be offered with a choice of four different power-hungry engines—two new and two returning. One of the new engines is a 2.7-liter EcoBoost, which is similar to the 3.5-liter EcoBoost engine found in past models, but the smaller displacement will likely allow the engine to achieve higher efficiency ratings. Efficiency is also expected to come from the new 3.5-liter V6 which will be equipped with systems to automatically adjust intake and exhaust to maximize efficiency.

Those looking for even more power can opt for one of the two returning engines, including the 3.5-liter EcoBoost which is able to deliver the efficiency of a V6 with the power of a V8. Those looking for pure, unadulterated power are sure to find that the 5.0-liter V8 is the most appealing option. Towing and payload numbers haven’t been released for any of the engines yet, but we can only imagine that with a an engine lineup like this that this will be the most capable F-150 ever released. 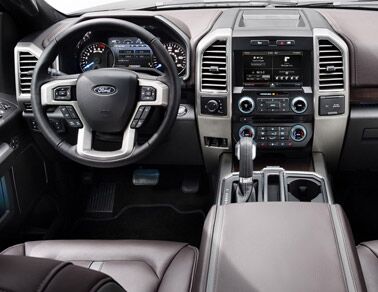 As we said, the 2015 Ford F-150 will be making a switch to an aluminum body, and while reception to the idea has been varied, we fully support the switch, as it will provide the 2015 F-150 with a number of capabilities that past models have never been able to offer.
The aluminum body will drop the pickup’s total curb weight by roughly 700 pounds, and contrary to popular belief, won’t sacrifice the extreme durability that has become synonymous with Ford trucks. In fact, Ford has said that the new body will allow the 2015 F-150 to be the most capable and efficient that it has ever been.

One of the biggest questions about the switch to aluminum is whether or not the frame will also be composed of the lightweight metal. The answer is no. The rigid frame of the Ford F-150 will still be made of the trusted high-strength steel that has been found on past F-150 models. 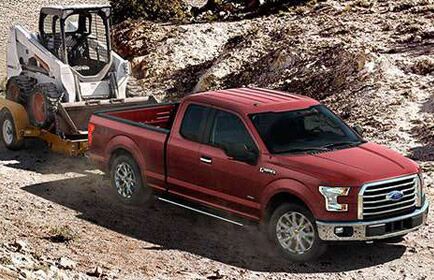 In addition to superior power and durability, the all-new 2015 Ford F-150 will be equipped with a number of new innovative interior features. That includes a 360-degree camera system which provides you with an overhead view of the F-150 and its surroundings which is helpful for a number of tasks including changing lanes and parking.

Towing and hauling is also expected to be a breeze in the new 2015 Ford F-150. As you would expect, the pickup makes trailer sway control standard to be sure that you keep your load in order, but it also comes with available Dynamic Hitch Assist which can help you guide your hitch ball right to the trailer’s receiver. To maximize safety, there is also an optional trailer brake controller to ensure that the truck’s brakes and the trailer’s brakes are working together.

Ford hasn’t released the full specs on all that the 2015 F-150 will offer, but from what we see right now, the pickup is going to be extremely impressive. As we said, the all-new F-150 release date is set for later this year, but when we get the 2015 Ford F-150 in Kansas City, MO, we will be sure to let you know. To be among the first to get behind the wheel of this durable and efficient pickup, be sure to get in touch with the experts at Matt Ford. 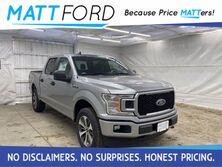