With torque-vectoring AWD and a variety of other performance-enhancing features, the RS is extremely fun to drive.

A 2.3-liter four-cylinder engine helps to give the Focus RS its quick and nimble performance.

As with every other Ford model on the market, the RS is expected to get a range of standard safety features.

With premium materials in the cabin, the Focus RS delivers a level of comfort like no other hot hatch out there.

With torque-vectoring all-wheel drive and a unique drift mode, the features of the Focus RS are quite appealing.

The fuel economy of the Focus RS has not been made known yet, but it's expected to be similar to the four-cylinder-equipped Mustang.

For a number of years, the Ford Focus RS has been available in Europe, but Americans have been forced to sit back and watch in envy, as the performance-tuned Focus has never been included in the U.S. lineup. That will all change next year when the 2016 Ford Focus RS arrives in America next spring. That's right. As part of their promise to release 12 new performance models by the year 2020, the Focus RS will be making it's way to the U.S. for the first time, and we couldn't be any more excited.

Seeing as it won't be available until early next year, it will still be a couple of months before we get the 2016 Ford Focus RS in Kansas City MO, but thankfully, we do have quite a bit of information to keep you occupied while you wait. Ford continues to announce more and more information about the new performance-driven hatchback, and to prepare you for its arrival in Kansas City next year, we thought it would be helpful to take a closer look at a few of the upcoming new features.

Before we get into the features, let's take a second to admire the design of the Focus RS. Much like the Focus RS of the past, the new 2016 model utilizes a hatchback body that is similar to the design used by its other "hot hatch" competitors such as the Volkswagen Golf R. In the pictures, you can see the Focus RS covered in the available Nitrous Blue color, but it will also be made available with Stealth Gray, Shadow Black and Frozen White paint colors. All colors will help the RS to stand out. 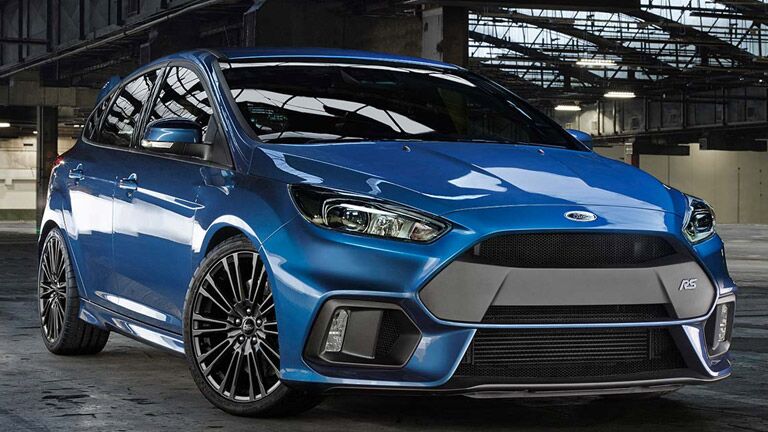 Get the Ford Focus RS in Kansas City

There will only be a single engine offered under the hood of the 2016 Ford Focus RS, but as the engine is extremely capable, there isn't much of a need for another option. The 2.3-liter four-cylinder that will be made exclusively available in the nose of the Focus RS is the same engine offered in the 2015 Ford Mustang, and as the compact RS is slightly smaller, it will be able to produce even more than the Mustang in terms of power. Ford has said that the engine will give it an output of 315 horsepower.

As you would expect, there are a few other features set to make their way to the Focus RS, many of which will help to enhance the already-impressive performance of the hot hatch. For example, the RS will get a revolutionary torque-vectoring all-wheel drive system that will help to direct power from the engine to the rear axle. Unlike the AWD systems of its competitors, the RS will be able to ship up to 70 percent of engine torque to the rear wheels. With that much power available in the back wheels, the Ford Focus RS is set up beautifully for drifting, and for that reason it has a one-of-a-kind Drift Mode.

With so many different features and options, it really comes as no surprise why the 2016 Ford Focus RS is one of the most anticipated new vehicles to arrive next year. If you are interested in learning more about the performance-tuned hatchback, or want to take it for a test drive when it arrives, be sure to fill out the form that we have provided on this page. When we finally get the RS in Kansas City, we will make sure that you are among the first to know. We look forward to hearing from you.