Although it hasn't been released yet, the Raptor will likely be able to achieve a five-digit towing capacity.

Rather than a V8, the 2017 Raptor will get an extremely powerful 3.5-liter turbocharged V6 engine.

Safety details have yet to be made clear, but as it's a Ford, we can imagine that the features will be impressive.

With a completely redesigned interior, comfort is likely to come standard in all models of the Raptor.

Much like the first-run Raptor, the 2017 model will get a range of off-road-performance-enhancing features.

The new aluminum body and smaller V6 will help to make the new Raptor far more efficient than its predecessor.

When it comes to off-road vehicles, there are none quite like the Raptor, which not only delivers the off-road capabilities that you need, but the high-performance that you desire. Although the first model of the Raptor was only on the market for one model year, it was pulled from the line, due to the fact that the F-150 received an aluminum body, but as part of the promise to deliver 12 new performance models by 2020, Ford redesigned the Raptor and is now bringing it back to market.

As the release date of the 2017 Ford Raptor isn't set to arrive until late next year, it will still be some time before we receive the 2017 Ford Raptor in Kansas City MO, but to keep you busy while you wait for the arrival, we have quite a bit of information about the high-performance off-road pickup that is sure to get you even more excited than you already are. Let's delve a bit deeper into the Raptor.

Just before, we mentioned that the Raptor was put on hiatus after the F-150 went aluminum, and as the Raptor is a by-product of the F-150, it will come as no surprise that the 2017 Ford Raptor will also have an aluminum body. Don't let the metal fool you, however. It's far from the same stuff you find wrapped around your soda. The military-grade aluminum helps to make the body just as strong, if not stronger than steel, and as it's lightweight, it drops the weight of the Raptor, allowing it to do more. 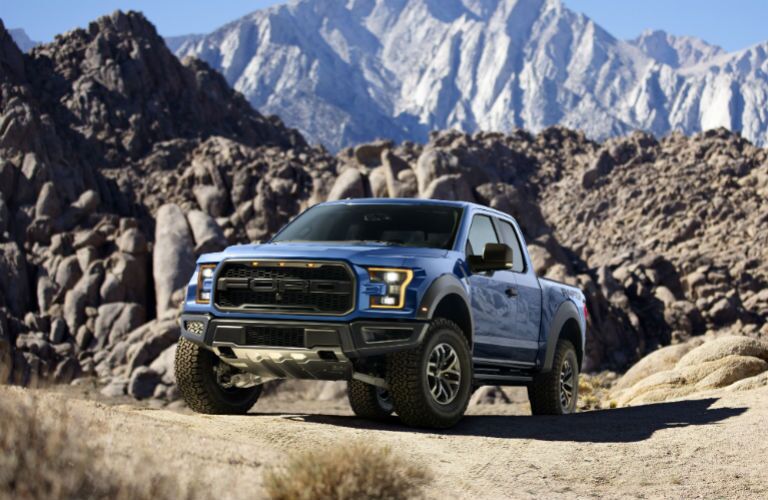 Get the Ford Raptor in Kansas City MO

In addition to the changes on the outside, there have been a number of tweaks made on the inside and beneath the hood. Previously, the Raptor was made exclusively available with a massive, fuel-gulping V8 engine that helped to give in some serious power. That engine has been scrapped for the 2017 model year, however, and has been replaced with a more efficient 3.5-liter EcoBoost V6, which comes turbocharged, helping it to generate even more power than the V8 of the past. The official output has not been released yet, but it will be higher than the previous 411-horsepower output.

As with the first-generation model of the Raptor, the new 2017 model will come outfitted with a wide range of performance-enhancing features that will help it to dominate off-road terrains. That includes larger Fox racing shocks, a torque-on-demand transfer case, an all-new Terrain Management System and standard 17-inch all-terrain tires that were specifically designed for the Raptor. There will also be a few other added features, but Ford hasn't released the full set of details quite yet.

To learn more about the 2017 Ford Raptor, be sure to check out the Matt Ford blog where you can find all of our ongoing updates about the high-performance off-road pickup. If you want to be notified as soon as the all-new Raptor arrives here in Kansas City MO, we encourage you to fill out the form that we have provided and let us know that you're looking for more information. As soon as we get an update from Ford, we will make sure that you are among the first to know.